Warning: "continue" targeting switch is equivalent to "break". Did you mean to use "continue 2"? in /homepages/4/d745385600/htdocs/clickandbuilds/BiblicalSanctuaryProductions/wp-content/plugins/leadpages/vendor/guzzlehttp/guzzle/src/Message/MessageFactory.php on line 197

Warning: "continue" targeting switch is equivalent to "break". Did you mean to use "continue 2"? in /homepages/4/d745385600/htdocs/clickandbuilds/BiblicalSanctuaryProductions/wp-content/plugins/leadpages/vendor/guzzlehttp/guzzle/src/Message/MessageFactory.php on line 216

Warning: "continue" targeting switch is equivalent to "break". Did you mean to use "continue 2"? in /homepages/4/d745385600/htdocs/clickandbuilds/BiblicalSanctuaryProductions/wp-content/plugins/leadpages/vendor/guzzlehttp/guzzle/src/Message/MessageFactory.php on line 254

Warning: "continue" targeting switch is equivalent to "break". Did you mean to use "continue 2"? in /homepages/4/d745385600/htdocs/clickandbuilds/BiblicalSanctuaryProductions/wp-content/plugins/leadpages/vendor/guzzlehttp/guzzle/src/Message/MessageFactory.php on line 357

Warning: "continue" targeting switch is equivalent to "break". Did you mean to use "continue 2"? in /homepages/4/d745385600/htdocs/clickandbuilds/BiblicalSanctuaryProductions/wp-content/plugins/leadpages/vendor/guzzlehttp/ringphp/src/Client/CurlFactory.php on line 363

Warning: "continue" targeting switch is equivalent to "break". Did you mean to use "continue 2"? in /homepages/4/d745385600/htdocs/clickandbuilds/BiblicalSanctuaryProductions/wp-content/plugins/leadpages/vendor/guzzlehttp/ringphp/src/Client/CurlFactory.php on line 382
 Is it a real spatio-temporal structure? – Biblical Sanctuary Productions

What is the heavenly sanctuary? Is it a real spatio-temporal structure? Or is it a symbol that stands for heaven and/or the divine presence that permeates the entire universe?

If it’s a symbol, then it does not take much to conclude that it’s allegorical, and mystical. However, if it’s real then is it real like Platonic Idealism? The Greek philosopher Plato theorized that ultimate reality did not contain spatio-temporal elements. This means that the heavenly sanctuary would be considered “real” but this version of reality is more like a “heavenly” archetype or form from which the “earthly” spatio-temporal sanctuary is but the mere copy. In his version of reality, the “heavenly” would be the “real” sanctuary but it would be completely stripped of material elements—no two rooms, no candlesticks, no altar of incense, and no ark of the covenant. There are many theologians and Biblical scholars that would respond positively to the question of whether the heavenly sanctuary is real, however, when you read the fine print their version of real does not contain any spatio-temporal elements.

The Bible clearly reveals that John saw seven lamps of fire (Rev 4:5), the throne (mentioned 19 times in Rev 4-5), a scroll (Rev 5:1-3), the altar of incense (Rev 8:1-5), and the ark of the covenant (Rev 11:19). If Plato’s version of reality is correct, then John’s description only constitutes his cultural understanding of ultimate reality, which means that what he described are mere symbols of a reality in which time and space do not exist but merely act as pointers to what is ultimately real.

Only if we take God’s Word as it reads without allowing philosophical ideas that are not supported by it can we come to an understanding on this question. In Exod 25:40, Acts 7:44, and Heb 8:5 Scripture uses the Greek word typos, which means a type, pattern, or model—meaning that the earthly sanctuary was patterned or modeled after the heavenly that was revealed to Moses. I’m going to focus on the word model in order to clarify the above questions. 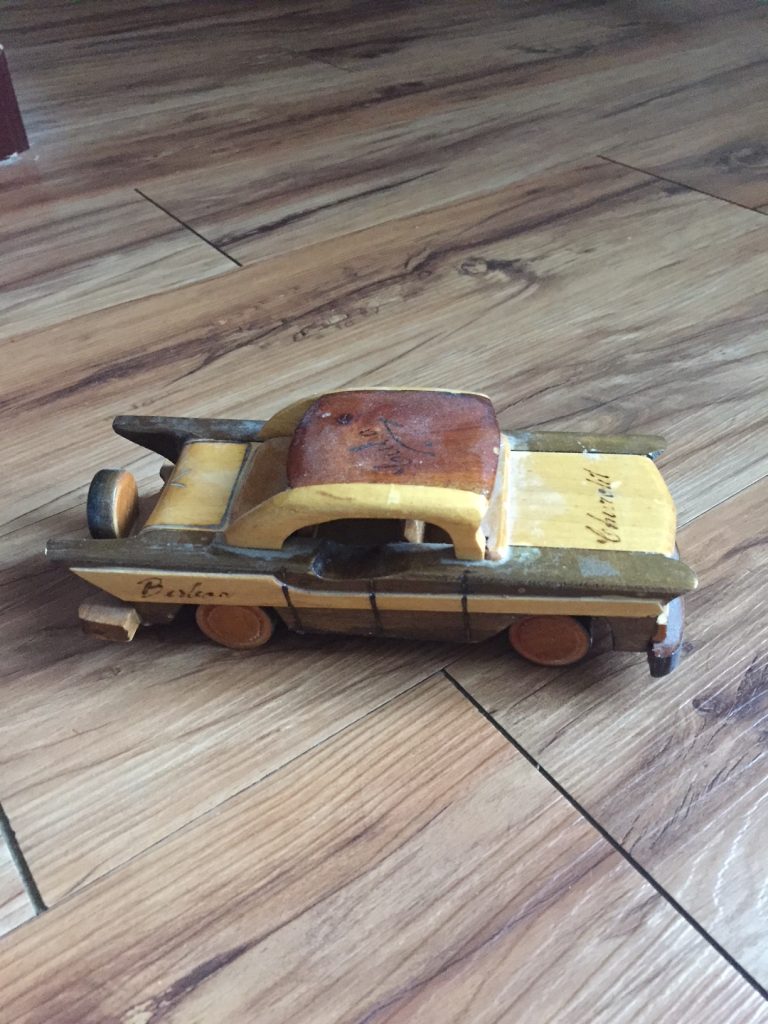 When my daughter Sofia went to Cuba on a mission trip, she brought me back a wooden 1957 Chevy. Just recently a drone spotted a group of people near the Amazon in Brazil close to the border of Peru that have not had any contact with the outside world. Now imagine being a missionary there and having to describe a car—something they have never seen. The easiest way to do that would be to take a model car with you and then tell them that a real car is like this model.

A model is both like and unlike the reality. Just like the real 57 Chevy, anyone looking at the model that has had contact with cars clearly understands that the model is an approximation of the reality that it represents or copies. In other words, it’s not a bike, train, airplane, or a horse; no one would ever draw that conclusion from looking at the model. However, there are differences: (1) the material of the model does not correspond exactly to the material of the real Chevy, (2) it’s not the same size, and (3) there are parts in the real Chevy that are not there in the model, such as the engine. Yet, these differences do not cancel out the fact that the model car is analogous to the real one.

These observations apply to the relationship between the earthly and heavenly sanctuaries. Notice this statement on page 349 of the book Patriarchs and Prophets. It reads, “No language can describe the glory of the scene presented within the sanctuary–the gold-plated walls reflecting the light from the golden candlestick, the brilliant hues of the richly embroidered curtains with their shining angels, the table, and the altar of incense, glittering with gold; beyond the second veil the sacred ark, with its mystic cherubim, and above it the holy Shekinah, the visible manifestation of Jehovah’s presence; all but a dim reflection of the glories of the temple of God in heaven, the great center of the work for man’s redemption.” The heavenly sanctuary is thus a real spatio-temporal structure that is analogous to the earthly sanctuary that is a model of the heavenly.

But, why is all this important?

In our last blog, we discussed how the sanctuary represents the blueprint or pattern that interconnects and interprets the many realities and doctrines that are associated with it. An attack on the heavenly sanctuary accomplishes several major objectives.

Second, an attack on the heavenly sanctuary is an attack on its systematic role, which is to interrelate all realities with the God who dwells there.

Stay tuned, as our next newsletter deals with the nature of the attack!